Jean Limburg: The Anatomical Man, from the Book of Hours of the Duc de Berry, 15th century. The signs of the zodiac correspond to each part of the body, starting with Pisces, the feet, and working up their way to the head, with Aries, the ram, that has sacred connotations. In each top corner are painted the arms of the Duke of Berry. Each area is complemented by four Latin inscriptions describing the properties of each sign according to the four complexions (hot, cold, wet or dry), the four temperaments (choleric, melancholic, sanguine and phlegmatic) and the four cardinal points: "Aries, Leo and Sagittarius are warm and dry, choleric, masculine, Eastern" in the upper left; "Taurus, Virgo and Capricorn are cold and dry, melancholy, female, Western" in the upper right; "Gemini, Aquarius and Libra are hot and humid, sanguine, masculine, Southern" in the lower left; "Cancer, Scorpio and Pisces are cold and wet, phlegmatic, feminine, Northern" in the lower right.

The zodiac (from Latin/Greek Zodiakos/ζῳδιακός) comprises a zone about 20° wide around the apparent orbit of the Sun, the ecliptic, within which the movements of the Moon and the planets visible from Earth pass. Within the zodiac lie the twelve constellations that have given their names to the well-known twelve signs of the zodiac. Twelve cosmic directional forces are thereby established.

From a spiritual point of view, the zodiac is the physical expression of the first hierarchy, in particular the community of the Cherubim and Seraphim, whose dominions extend far beyond the boundaries of our solar system, whereby the Cherubim are to be addressed as the actual zodiacal beings.

The twelve signs of the zodiac

Western astrology, also called tropical astrology, is oriented towards the course of the year and continues to calculate with the original system of the zodiac signs despite the shift in relation to the corresponding constellations. The tropical zodiac begins with the vernal equinox, which is invariably equated with the beginning of the zodiac sign Aries. In fact, however, the vernal equinox today is astronomically already far in the constellation of Pisces. According to Rudolf Steiner, it had entered the constellation of Aries much earlier, namely at the beginning of the Greco-Latin period in 747 BC.

The Origin of the Zodiac

Each planetary system evolves in seven successive planetary stages of world evolution (Manvantaras), each separated from the other by a purely spiritual, externally intangible existence (Pralaya). In the course of this series of development, it rises from the planetary state to the fixed star system and at the end of the sevenfold series rises to the zodiac. At the beginning of our world system, the beings of the first hierarchy had already completed their solar development, that is, their fixed star existence. The previous world system had dissolved after its completion and had become the circumcircle, the first, albeit still completely unstructured system of a completely new zodiac, out of which our planetary system was created.

The formation of our planetary system began with the first Hierarchy seeking a suitable spherical space in the Universe (Lit.:GA 110, p. 82) and working creatively into it from outside. The Seraphim received the plans for the new world system from the Trinity. The Cherubim, who in their totality as zodiacal entities are encamped around this centre of their creative activity, continue to work out these plans, and the Thrones, by letting out their substance of will, which outwardly appears at first only as heat, made possible with the Old Saturn, the first planetary incarnation of our Earth for a first outer realisation.

The differentiated structure of the zodiac began to form during the old solar existence of our planetary system. The Cherubim appeared in very specific etheric forms, namely as winged lions, bulls, men and eagles. Each of these four cherubic forms had two accompanying forms: the bull was accompanied by Aries and Gemini, the lion by Cancer and Virgo, the eagle, which much later became Scorpio, was accompanied by Libra and Sagittarius, and the human form, which today is called Aquarius, was accompanied by Capricorn and Pisces.

The Old Sun, which at that time was not yet a true fixed star, but from an occult point of view must still be called a planet, did not yet shine continuously, but illuminated itself at periodic intervals and then sank again into darkness. During these solar nights the Cherubim formed the first plant of the physical animal forms out of the solar nebula. That is why the sphere of the Cherubim was later rightly called the zodiac. 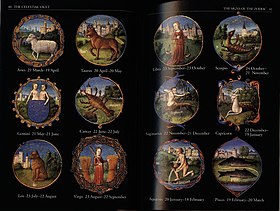 The twelve astrological signs, miniatures from a late 15th-century book of hours. (The Sky: Order and Chaos by Jean-Pierre Verdet, from the 'New Horizons' series)

When, after the separation of the Sun from the Earth, the alternation of day and night had come into being, which at that time, however, lasted much longer, gradually, during the time of the solar day, the lower physical animal-like man began to join the upper etheric man. In fact, the names of the signs of the zodiac are derived from these attached forms. What could not be integrated into the human being by these form forces was put forth as an independent animal form. First, the fish form attached itself to the human being below when the sun was in the sign of Pisces. The feet of today are in fact the original Pisces; the lower legs of Aquarius, the knees are connected with the sign of Capricorn. Thus the animals developed further and further and that which had become the thigh in man is called Sagittarius. The image of the centaur refers to the human being of this time, although only the lower part was physically developed and the upper part still remained ethereal.

Only during the separation of the Moon from the Earth in the middle of the Lemurian period did the sexuality of man develop. The Sun was then in the sign of Scorpio. After the separation of the Moon, the etheric light form of the upper human being also developed into a heat perception organ, which was the first of all the senses to open up to the outside. In Greek mythology it is called the polyphemus eye. (Lit.:GA 106, p. 92)

When man was finally physically formed to the middle, the Sun and Moon were just holding the balance; therefore the hip, which is exactly the middle of man, is assigned to the sign of Libra, in which the Sun was then just standing. This was the case, as already mentioned above, in the middle of the Atlantean period.

The length of time in which this development took place was, of course, much longer than the 2160 years it takes the Sun to advance one sign of the zodiac in the Platonic world year:

„One would have a wrong idea if one thought that this happens by a passage of the sun. The sun goes once all the way around the zodiac and only after this whole revolution does the progress happen. In earlier times it had to go round even more times until progress happened. Therefore one must not apply those known time calculations of the post-Atlantean epoch to older epochs.“ (Lit.:GA 106, p. 100)

The cosmic man as the archetype of the earthly man

The term homo signorum or zodiac man is used to describe the pictorial representation of the zodiacal melothesia, which portrays the human being as a microcosm that represents the macrocosm. The outer form of the human being and the individual parts of the physical body are an individual image of the creative forces working from the zodiac. These form the cosmic man, the giant Ymir of Germanic mythology or the Adam Kadmon spoken of in the Kabbalah. (Lit.:GA 110, p. 143ff) The forces of the planetary system, on the other hand, shape the inner organs, e.g. the solar forces the heart, Mercury the lungs, etc.

Rudolf Steiner also pointed out other connections. For example, the twelve senses of the human being correspond to the 12 signs of the zodiac, which at the same time form the 12 original consonants of the world word. Steiner also showed that the human being can form twelve fundamental world views, which also correspond to the signs of the zodiac. An overview is given in the table below.

The head or the senses and the 12 pairs of cranial nerves are a transformation of the power system of the body of the previous incarnation and therefore again an image of the zodiac. Thus, for example, in the next life on Earth, the arms are transformed into the sense of speech, the knees into the sense of touch. (Lit.:GA 170, p. 222ff)