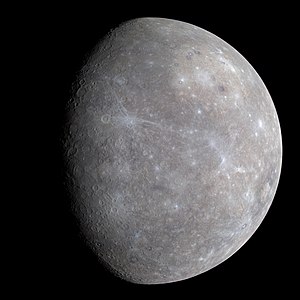 Mercury in natural colours, at the approach of the Messenger space probe. 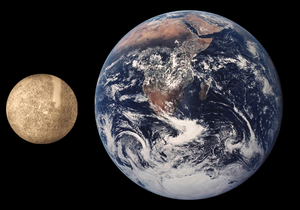 Mercury (ancient Egyptian: Sebeg; Hebrew: כוכב Kawkab; astronomical sign: ☿) - similar to Venus - only detached itself from the Earth and Sun after the separation of the latter. Similar to Venus, certain retarded Luciferic Spirits of Form created a dwelling place for themselves here that was appropriate to their level of development, which contained finer substances than the Earth, but less fine ones than the Sun. It should be noted that with the transition to the Copernican system, Venus and Mercury were interchanged in the order of the planets (see → Occult order of planets).

„Mercury is at certain times equally drying and receptive of moisture, because it is never far from the heat of the Sun, and at other times moistening again, because it is nearest above the sphere of the Moon, which is nearest to the Earth. It changes rapidly from one to the other, inspired, as it were, by the rapidity of its motion in the neighbourhood of the sun itself.“

– Claudius Ptolemy: Tetrabiblos, Book I, The Power of the Planets

The second half of the Earth's evolution, in which we have stood since the middle of the Atlantean period, is closely connected with Mercury's forces. Many initiates are therefore Mercury initiates in order to promote this development.

In Egyptian mythology and Egyptian astronomy, Mercury (ancient Egyptian: Sebeg) has been the star of Set, the brother of Osiris, since ancient Egyptian times and later also of Thoth, who corresponds to the Greek Hermes.

In the planetary chapter of the Book of Nut, lines 153 to 159 report on a cosmic dispute between Horus and Set at sunset, which is finally settled through the mediation of Thoth. The other celestial "followers of Set" are located in the western sky, as is Set. Chepesh (Big Dipper), the constellation of Set, is located in the northern sky, which is why only the planets Mercury or Venus could be in question at the time of the sunset. In this dispute, the planet Venus is assigned as the star of the barque of Bennu, which allowed a certain identification of Mercury as the star of Set.

In the planetary lists of the New Kingdom of Egypt, the epithet "Star of Seth" is also attested for Sebeg. Due to the certain identification of the other planets and their equations with ancient Egyptian gods, Mercury could be assigned to the god Seth as the only remaining planet.

In Book of the Dead 136, as already in the coffin texts of the Middle Kingdom of Egypt, the determinative of a star staircase is attested, which the deceased uses to reach Sebeg. In one variant, the starry staircase functions as a defence against the breakers on the coast.

In the Greco-Roman period, Sebeg was also regarded as the "Star of Thoth". A rare iconographic representation has been largely destroyed. In front of the god is a six-legged bird with a serpentine beak and four feet.

Mercury beings are the stimulators of the intellectual or mind soul (Lit.: GA 98, p. 198, GA 102, p. 59f). The Mercury sphere delimits the dominion of the Archangels. The leading Archangel is Raphael. However, only supersensually perceptible human-like beings live also on Mercury. In the afterlife, man comes into their realm after he has passed through the Kamaloka (purgatory) - and thus the lunar sphere.

„On Mercury dwell beings similar to human beings, but they do not know death. The life of Mercury beings proceeds in such a way that such a transition is only like a transformation, just as we change our body between birth and death. Thus the souls of Mercury beings live when they put on their spiritual bodies and lose them again, but they do not know death.“ (Lit.:GA 98, p. 186)

„If we call this our world (see drawing, light), then by developing other states of consciousness we come respectively into other worlds. Let us suppose, then, that we develop that state of consciousness which we must have in order to enter the world into which we can follow the dead immediately in the years after their death. I will characterise this world by drawing it (yellow) abutting our world here. We would then, if we were to develop the next state of consciousness, the state of consciousness through which we enter further into that life which the dead person then enters after he has completed the path backwards, and which I have called the state of empty but waking consciousness in relation to the physical world. There we would enter into another world (red), into this world where, for example, man comes together very particularly with the Mercury beings, with those happenings, with those facts which lie in the sphere of Raphael in the sense characterised yesterday. In this sphere one learns above all to know the healing powers of human nature.“ (Lit.:GA 243, p. 157f)

„Then one also knew that one can only learn about the nature of diseases, which corresponds to the truth, when the truth comes from the Mercury beings; therefore all healing, all medical knowledge, was the secret of certain Mysteries, the Mercury Mysteries. There it was really so in such mysteries that not a human being stood there, as in the universities of today, but that actually higher beings from the star regions worked through the cultus that was customary at these mysteries. The gods themselves were the teachers of men, and medicine was that knowledge of wisdom in ancient human times which was brought directly to men by the Mercury beings in the Mysteries; therefore this ancient medicine was also regarded by men as a gift of the Divine. Basically, all that is fruitful in medicine today is either derived from ancient times, an after-effect of that which was experienced from the gods of Mercury, or else it must be found again through those methods which instruct man to have contact with the gods, to be able to learn from the gods.“ (Lit.:GA 239, p. 94) 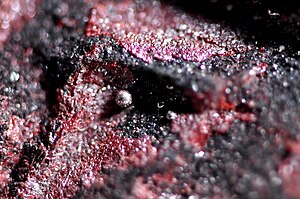 Quicksilver (Latin: hydrargyrum), as chemical element called Mercury, came into being through the direct influence of Mercury's forces. In plant growth, the Mercury rhythm is revealed in the formation of the leaves, in the human organism in lung activity and in language through the vowel I. Among the trees, the elm is primarily associated with Mercury.

„All our present metals have only gradually become what they are now. Gold, silver, platinum and so on all behave like this: If you heat them, they first become warm, then liquid, then gaseous. That's how all metals were once in the gaseous earth. Gold also first condensed with the earth, it was once completely ethereal gold. If we go back to the time when the earth was still united with the sun, there was no solid gold inside. The parts of the white ether of the sun became liquid and then solid. These are the veins of gold that are now in the earth. Gold is condensed sunlight, but silver is condensed moonlight. All mineral substances have gradually condensed. Now, when men will become more and more spiritualised, mercury (Mercury) will become solid. As water now does, so gold and silver once formed drops. It is connected with the whole process of the development of the earth that Mercury is now still liquid. It will become solid when Mercury, the messenger of the gods, has fulfilled his task. At that time, in the middle of the Atlantean root-race, mercury was taken from Mercury in ethereal form. If we did not have mercury, we would not have the Christ principle. In the drops of mercury one has to see what was incorporated into the earth in the middle of the Atlantean time.“ (Lit.:GA 93a, p. 207f)

„Mercury is a metal that will undergo transformations, but transformations towards perfection. Mercury, as a metal, has not yet pulverised all those powers which every substance has in the spiritual before it becomes a substance. In the future it will still be able to bring out essentials of its spirituality and will still be able to assume other forms, so that in the mineral world mercury corresponds in a certain way to the human larynx and also in a certain way to the organ of which the larynx is the appendage, the lung. Other metals, let us say copper, for example, are in a kind of descending development. This will become apparent in the future: It no longer has inner spiritual forces which it can bring out, but must more and more merely fragment, merely disintegrate, merely become a far-away dust.“ (Lit.:GA 134, p. 105f)

The Mercury hexagram from a geocentric point of view. The yellow circle symbolises the apparent orbit of the Sun.

Mercury has a synodic orbital period of about 116 (exactly 115.88) days. From a geocentric point of view, this results in an approximately equilateral triangle (trigon) in the course of a year if you connect the three points of Mercury's orbit closest to the Earth (3 x 116 = 348, i.e. a little less than a year with rounded 365 days. Another, but larger trigon becomes visible if the points furthest from the earth are connected in the same way. Both triangles together form a hexagram. This cosmic archetype is the basis of many three- or six-fold earthly forms. A typical example is the 3- or 6-rayed symmetry of the Lily family (Liliaceae).

The significance of the Mercury sphere for the life after death

In the afterlife, man first passes through the Kamaloka, which corresponds to the lunar sphere, where he purifies himself of the desires that bind him to the past life on earth. Then he ascends to the Mercury sphere. How he lives through this depends on his moral condition. Moral people will be very sociable beings here, while immoral people will experience the Mercury sphere in great loneliness.

„By moral constitution of our soul, at this characterised time, we become sociable spirits, having sociability with the other spirits, that is, with human spirits or with spirits of the higher hierarchies. Due to the defective moral condition of our soul, we do not become sociable spirits, but reclusive spirits, such spirits who can only with extraordinary difficulty rise above the mist of their vision. And this is an essential reason for suffering after death: feeling as a lonely spirit, as a spiritual hermit; whereas it is an essential characteristic of sociability to find the connection to what is necessary for one, what one needs. And it takes quite a long time for the life after death to go through this sphere, which in occultism is called the Mercury sphere.“ (Lit.:GA 141, p. 29f)