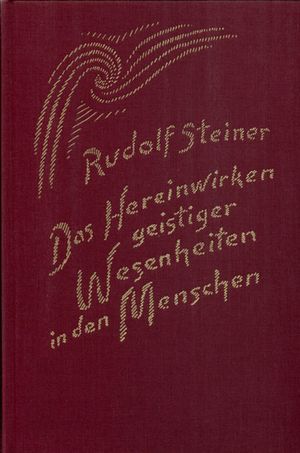 The Influence of Spiritual Beings on Man

Thirteen lectures in Berlin between 6 January and 11 June 1908

The group souls of animals, plants and minerals. The Prometheus legend / Planetary existence, solar existence and zodiacal existence / Earlier embodiments of the earth as deeds of spiritual entities. Effects of Mars, Mercury and Jupiter / The spirits of form. Myth of Kronos and Gäa / The evolution of the world. Man as the first-born before animal, plant and mineral. The Earth as a Warmth Organism / The Group Soul Consciousness of the Ancient Moon / The Primordial Forces as Spirits of the Ages / The Emergence of Yoga. Vedanta philosophy, the system of the Hebrews, the Egyptians. The Greek system of religion / The development of man from group soul to individuality / On elemental beings. The ego-soul of animals, plants, minerals / The connection of man with spiritual beings in art.