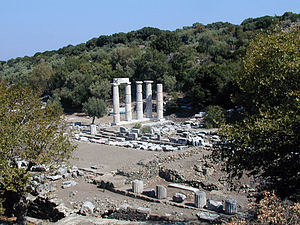 The Kabiri (also Kabeiri, Cabeiri or Cabiri, from Greek: Κάβειροι Kábeiroi "the great ones", Latin: Cabiri) were unspecified chthonic gods of both sexes from Asia Minor, who were often associated with fertility, seafaring or blacksmithing. They were worshipped as "Great Gods" (Greek: Μεγάλοι Θεοί Megáloi Theoí), especially on Samothrace, but also on Imbros and Lemnos. There were other cult sites in Macedonia, Boeotia, Pergamon and Miletus, among others. However, the cults were sometimes very different.

The Kabiri were regarded as children of the Great Mother, the Kabeiro (also Cabeiro, Greek: Καβειρώ). According to Greek mythology, she was a daughter of the shape-shifting sea god Proteus and lived as a sea nymph on the island of Lemnos. After she was cast out of Olympus, the Greek smith god Hephaestus had three sons with her. According to some ancient authors, three Kabeiri and three Kabeirian nymphs (Greek: τρεῖς Καβειρίδες νύμφαι treís Kabeirídes nýmphai) were worshipped on Lemnos.[1] Among others, Kabeiro was identified by the Greeks with the mother of the gods Rhea, but also with Demeter, Hecate and Aphrodite.

The name of the Kabiri is not of Greek origin, but derives from the mountain Kabeiros in the landscape of Berekyntia, which belonged to Cybele, the Phrygian mother of the gods. Later they made Samothrace their sacred mystery island and founded the Samothracian mysteries here. At this time Orpheus was also their disciple. They were invoked as saving gods by sailors in distress.

Compared to the Great Mother, they appeared like dwarfs, yet they were called Megaloi Theoi, "Great Gods". The four surviving god names known from mysteries of the Kabiri, probably from Thebes, Axierus, Axiocersus, Axiocersa and Cadmilus, were claimed to denote Persephone, Demeter, Hades and Hermes. The prefix axios (Greek: ἄξιος), which occurs in these names, means worthy.

The Kabiri of Lemnos were blacksmiths, and were therefore called Hephaistoi, which places them in kinship with the Telchines, those divine artists who are said to have formed the first statues of the gods from ore in the human image. Only with the Telchines, the underworldly trait was more prominent. They were discredited as evil sorcerers and jealously guarded the secrets of their art.

There is also a story of a tragic fratricide among the Kabiri:

„On the mainland, opposite the aforementioned islands, in Macedonia, it was said of them: there were once three Corybantes, three brothers, and two of them murdered the third. They wrapped the cut-off head in a purple robe, garlanded it and carried it on a brazen shield to the foot of Mount Olympus. There they buried it. The same two brothers also carried the mystery basket, which contained a phallos, the limb of Dionysus, to the Etruscans.“ (Lit.: Kerényi, p. 70)