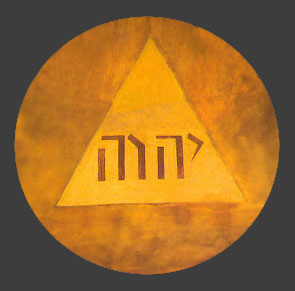 Francisco de Goya: The Name of God (YHWH), detail from the ceiling fresco of the Basílica del Pilar (1772)

Yahweh, Jehovah or also Yahweh-Elohim (Hebrew: יהוה YHWH is written as Tetragrammaton[1] and - read from right to left - is composed of the 4 letters Yod (י), He (ה), Waw (ו), He (ה)) is one of the seven Elohim, who are the actual creators and guides of our Earth evolution, as reported in Genesis. YHWH is considered the unpronounceable name of God and is therefore always replaced by the address Adonai (Hebrew: אֲדֹנָי "My Lords", plural) in the reading of the Torah. In common usage, the name of God is usually rendered as HaShem (Hebrew: השם "the name").

Originally, Yahweh, like the other Elohim, had his residence on the Sun. After the separation of Sun and Earth and the further detachment of the Moon from the Earth, he took up residence on the Moon and from here sends his mature wisdom to the Earth with the reflected lunar light. Yahweh is therefore rightly also worshipped as a lunar deity.

Yahweh as the essential unified consciousness of the seven Elohim

Yahweh is at the same time more than just one of the seven Elohim; he represents the common higher unity consciousness of all seven Elohim, which could only mature through their accomplishing the six-day work to create man as their common image.

„When we see the human being coming into existence as a very small child, we know that what we call a unified consciousness has not yet developed in him. The child even expresses the I, which holds the consciousness together, only after some time. Then what is in the soul life comes together in the unity of consciousness. The human being grows up by combining the various activities which are still decentralised in the child. Thus this unification in man is an upward development to a higher state. Analogously, we can think of the further development of the Elohim. They have developed a certain activity during the preparatory evolution of man. By carrying out this activity, they have learned something themselves, they have contributed something in order to raise themselves to a higher level. They have now attained a certain unitary consciousness as a group, and have not only remained a group, but have become a unity. The unity has become, as it were, essential. This is something extraordinarily important that we are saying on this point. So far I have only been able to tell you that the individual Elohim were such that each could do something special. Each was able to bring something to the common decision, to the common image according to which they wanted to form the human being, and what the human being was was, as it were, only an idea in which they could work together. This was not yet anything real in the work of the Elohim. There was nothing real until they had created the common product. But in this work itself they developed higher, they developed their unity into a reality, so that they were now not only seven, but that the sevenfoldness was a whole, so that we can now speak of an Elohimness which reveals itself in sevenfold ways. This Elohimness has only become. It is what the Elohim have worked their way up to.

The Bible knows this. The Bible knows the idea that the Elohim are, as it were, the members of a group beforehand and then arrange themselves into a unity, so that beforehand they work together like the members of a group and afterwards they are directed from a common organism. And this real unity of the Elohim, in which the individual Elohim work actively as members, as organs, is called Yahweh-Elohim in the Bible. There you have now, in an even deeper way than was previously possible, the concept of Yahweh, the Jehovah. That is why the Bible also speaks at first in its report only of the Elohim, and begins, where the Elohim themselves have advanced to a higher stage, to a unity, to speak of Yahweh-Elohim. This is the deeper reason why at the end of the work of creation the name of Yahweh suddenly appears.“ (Lit.:GA 122, p. 123f)

Yahweh and the Group-I of Man

Yahweh placed the group-I in the astral body of man in order to prepare him to develop the individual I later on. Together with the other Elohim, Yahweh gave man the ego by allowing that which lived as spiritual in the air to flow into him:

"Then the God the LORD made man of earth from the field and breathed into his nostrils the breath of life. And so man became a living being." (Genesis 2:7)

Later, in the New Testament, the Christ is referred to as " God the LORD", but Yahweh is not Christ, but only His prefiguration, as it were. Before the Christ descended to earthly existence with the baptism of the Jordan, He revealed Himself through the fellowship of the six Elohim remaining on the sun, and Jehovah directed down to Earth from the Moon, as through a mirror, this Christ-power shining in light. Before the Christ himself descended to earth life, he sent his mirror image with Jehovah beforehand, as it were, to prepare his earth work.

When Jehovah appeared to Moses in the burning bush and the latter asked his name, he said to Moses to indicate the source of the I-power:

„The name "I" cannot sound in from outside, it must sound in the soul itself. This is the fourth member of the human being.

The Hebrew occult science has called this I the unpronounceable name of God. "Yahweh" means nothing else than: "I am". Whatever interpretations an external science may give, in truth it has meant: 'I am' - the fourth member of the human beinghood.“ (Lit.:GA 97, p. 106)

Yahweh and the lunar forces

As a lunar deity, Jehovah acts in particular on all human organs related to the lunar forces, that is, on the brain on the one hand and on the reproductive organs on the other. The "chosen people" were in fact distinguished from the beginning by their special fertility and their formation of the mind (bound to the brain), which pushed back the atavistic clairvoyant abilities. The folk spirit rolls on with the blood, i.e. with the hereditary stream, in which Yahweh works for man largely unconsciously. Consciously, however, Yahweh has been working in the mind since He made His covenant with Abraham. The powers that had formerly been accessible only through ancient clairvoyance now moved into the inner human organisation with Abraham. Abraham thereby developed with his brain a physical organ with which he could raise himself - without clairvoyance - purely through thinking to the divine, and this organ he bequeathed to his descendants and thus shaped the mission of the Hebrew people. This picture also includes the legend that has been handed down, according to which Abraham is considered the inventor of arithmetic. This Jehovah-directed development was thus aimed at the intellectual soul, which was to be formed in a special way in the Hebrew people, and which reached maturity at the time of the great prophets in the last pre-Christian Michael Age, the Axial Age according to Karl Jaspers.

The formation of the mind is inseparably connected with the Luciferian temptation. Through the Fall, man ate from the tree of knowledge, but should not also eat from the tree of life. The intellectual soul is formed, as we know from Rudolf Steiner, through the unconscious work of the I on the etheric body. However, the etheric body is thereby affected in a certain way, the life forces are partially withdrawn from the organism, and illness and death have thereby entered the human species. Later, i.e. in post-Christian times, the life spirit is to be formed through the connection with the (etheric) Christ by conscious work on the etheric body. Then we will creatively bring forth new life with the help of the Christ and then we will thereby also be allowed to eat from the tree of life.

It is no coincidence that the words Yahweh (Hebrew: יהוה YHWH) and Eve (חוה) are related. Eve, as the great Earth Mother, is contained in Jahve as the sum of all that came over through the Old Saturn, Sun and Moon evolution, where the basis for the physical body, the etheric body and the astral body of man were created. It was only on Earth that the I came along, represented by the Yodh (י) in the name "Yahweh".