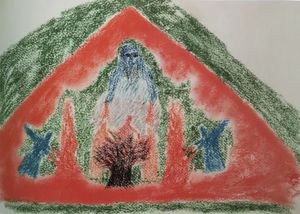 Rudolf Steiner: Yahweh and the Luciferic Temptation, pastel on paper (1914) 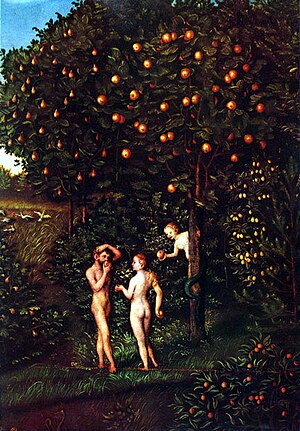 "The Fall of Man" by Lucas Cranach the Elder. The Tree of Knowledge is on the right.

The Luciferic temptation approached man in Lemurian times and he was thereby drawn into the Fall and expelled from Paradise. It is not possible to speak of an individual guilt of man, because human individuality was only germinated at that time, but not yet further developed, and Lucifer was a superior spiritual being. The compensation for the Fall of Man, the healing from its consequences, could therefore only be brought about through the grace of an even higher spiritual being: through the Christ, who went for man's salvation through the Mystery of Golgotha. Beyond that, however, the Fall was also the indispensable prerequisite for man to acquire freedom on Earth and thus also love. For the bearer of love can only be a being that is able to give itself away out of freedom. In this sense, man is the anthropos, literally the one turned against, who opposes or turns away from the gods in order to be able to reconnect with them as a completely independent being out of freedom and love.

After first the Sun had emerged from the Earth in the Hyperborean time and later the Moon in the Lemurian time, Yahweh, one of the seven Sun-Elohim, but who had now united with the Moon and worked from there, wanted to give man a consciousness through which he could reflect the wise design of the world in himself completely unadulterated. This wisdom was a result of the old lunar evolution, the previous embodiment of our Earth planet. However, a consciousness of freedom would not have been connected with it at first.

Then the Luciferic beings intervened in the development. They had already become adversaries of the Sun spirits on the Old Moon. They could not go along with the Sun when it separated from the Earth, and they also had to regard Yahweh as an adversary. The Luciferic hosts now made the human astral body more independent than the Elohim had intended. The human consciousness thus no longer remained a mere mirror of the cosmic wisdom, but the human being got the possibility from his astral body to regulate and control the images of consciousness. However, the human I thereby also became much more entangled in the activity of the astral body and more and more dependent on it.

Thus the Luciferic spirits enabled man to develop free activity in consciousness - but with it also the possibility of error and evil. Man had eaten from the tree of the knowledge of good and evil.