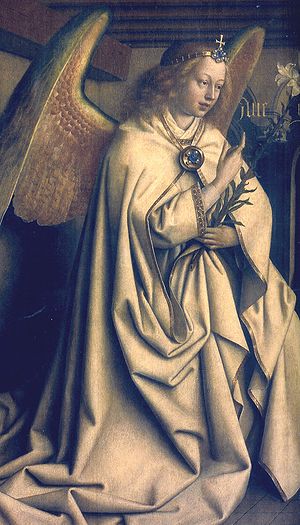 Gabriel, the Angel of the Annunciation, on the Ghent Altarpiece

Gabriel (Hebrew: גַּבְרִיאֵל "God is strong", Arabic  Djebrail or Jibril) is the second of the four main Archangels and one of the seven primary Archangels assigned to the planetary spheres. He is mentioned in the Bible in the Book of Daniel and in the Gospel of Luke in connection with the Annunciation of the Lord. He is especially worshipped in Islam as an Angel of Revelation who inspired Muhammad in the recording of the Quran.

Gabriel is associated with the powers of childbirth and is often depicted in visual art in female form. He is regarded as a messenger of God and is often also seen as an interpreter of visions. Gabriel's last archangel regency lasted from 1510 - 1879 AD (Lit.:GA 245, p. 171). His dominion is the lunar sphere which also represents the planetary stage of the Old Moon, which preceded the present evolution of the Earth. He thus also has a special relationship to the astral body of man, which was formed at that time. According to Catholic tradition, Gabriel stands in the north before the Throne of God. According to Rudolf Steiner, on the other hand, he stands in the south as a sublime, loving figure; in the north stands Uriel instead.

„In the direction of the south stands the one who is connected with the development of the Old Moon. In the silvery white light his being shines. A sublime, loving figure, he is called by the name of Gabriel.“ (Lit.:GA 265, p. 337)

During the last Gabriel Age, which lasted from 1510 - 1879 AD (see → Archangel regencies) and served above all to raise the powers of the intellectual soul to the level of the consciousness soul, a new organ was formed in the brain through transformation of the lunar reproductive powers. Since the beginning of the Michael age, these organ-forming forces have turned away from the physical body and become increasingly freely available for the soul life. The basis for a new spiritual thinking is thus created, from which a new reincarnation memory will emerge. Through natural evolution - that is, without initiation - the retrospective view of past earthly lives will again open up to man.

„"In the present human period, a delicate organ is being prepared which is not noticeable to the external anatomist and physiologist. And yet it exists anatomically. This organ lies in the human brain, near the organ of speech. The development of this organ in the cerebral convolutions is not the result of the karma of individual souls, but it is a result of human evolution as a whole on Earth, and in the future all human beings will possess this organ, no matter what may be the evolution of the souls that will incarnate in this body, and quite independently of the karma connected with these souls.

This organ will be possessed in a future incarnation by people who may at present be hostile to Anthroposophy, as by those who are now sympathetic to it. This organ will be the physical instrument for certain soul forces in the future, just as, for example, Broca's organ in the third turn of the brain is the organ for the human faculty of speech.

When this organ is developed, humanity can either use it properly or not. Those will be able to use it correctly who are now preparing the possibility of having the present incarnation truthfully in memory when they will be in the next. For this physical organ will be the physical means for the remembrance of a former incarnation, which can now only be achieved through a higher spiritual evolution.

At present, for by far the greatest number of people, the memory of previous incarnations can only be attained through higher spiritual development, through initiation. But that which in present times can only be attained through initiation will later become, as it were, the common property of humanity. Our present knowledge was formerly the special knowledge of the Atlantean initiates alone; now everyone can possess it. In the same way, the memory of former earth lives is at present possible only to the initiates, but in the future every human soul will be in possession of it.

It is possible for the initiate to acquire certain knowledge without the use of a physical organ, but this knowledge can only become the common property of humanity when humanity as a whole, in the course of evolution, develops an external physical organ whereby it can be acquired. The reincarnated souls, however, must be able to use this organ properly, with the help of which one will later remember one's previous incarnations. Only those who in the present incarnation have clearly inscribed occult thoughts and ideas in the Akashic substance will be able to use this organ in the right way.

One often hears it said: What is the use of believing in past lives when humanity in general can remember nothing of them? - One should rather think how much more astonishing it would be if, according to what is known of life, humanity in general could even now remember its past lives. If we ask ourselves what is necessary for us to remember anything at all, we would have to answer: We can only remember what we have thought before.

Everyday life can teach us this. Think of someone who cannot find his cufflinks when he gets up in the morning. He looks for them everywhere but cannot find them. Why can't he find them? Because while he was putting them away, he was not thinking about what he was doing. Let him do the opposite experiment, let him try to be clearly conscious every evening while he is putting away his cufflinks: I am putting my cufflinks in this place, - he will then never make a mistake, but will go straight to where he has put them. The thought recalls the process to his memory. If we live in a future incarnation, we shall only remember the past ones if we can remember the true nature of the soul, which continues from one incarnation to another. He who does not study occult science in the present life cannot gain knowledge of the nature and essence of the soul, and if he does not have this knowledge, how should he, when incarnated again, remember what he never thought of in the former incarnation?

Through the study of spiritual science, which includes, among other things, the study of the essence of the soul, we prepare within ourselves that which will enable us to remember in a future incarnation what has happened in this present one. However, there are many people at present who do not yet wish to devote themselves to the study of this knowledge. These are reborn, perhaps physically trained in the next incarnation with the organ for remembering past lives mentioned earlier, but they have not prepared themselves in such a way that they could remember the past.

What significance then does spiritual science have in the present life in addition to all that we have already said? Through it we gain the possibility of using in the right way the organ which will be developed in the people of the future, namely, the organ for remembering previous earth lives. In our present incarnation we must inscribe the knowledge of our soul in the Akashic substance, so that in our next incarnation we can use the organ for the memory of the past in the right way, the organ which develops in man whether he wants it or not. So in the future there will be people who will be able to use the aforementioned organ for remembering past lives on earth, and others who will not be able to use it. In the latter certain illnesses will appear because they will have an organ in their physical body which they cannot use. To possess an organ and be unable to use it will produce nervous diseases of a very definite kind, and these nervous diseases, which will arise from possessing this particular organ and not being able to use it, will be far worse than any that man has hitherto known.

When one looks at the context of facts in this way, one begins to get an idea of the mission of spiritual science and of the true importance of understanding life and humanity through the study of this knowledge. But in case the impression which this consideration has made on you should lead to misunderstandings, I want to mention another fact which may alleviate what was embarrassing about this impression. Although the true occultist can see that spiritual science must enter into the spiritual life of our present time, so that the man of the future may be able to use the organ for memory and remain physically in good health, it cannot at the same time by any means be asserted that a man who is not prepared to receive spiritual science in the present time will be lost for his following incarnation in the manner previously described. For a long time in the future it will still be possible for a man, even if he has neglected what has been indicated, namely, to acquire the use of the organ for memory in this life, to make up for it in the next life, for he will still have some opportunities to restore his health and to acquire spiritual-scientific truths. But the time will come when this opportunity will cease.“ (Lit.:GA 152, p. 20ff)