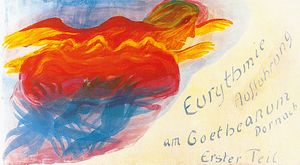 „The archetypal organism contains all the members that can be found in any animal. In the individual animal form, one is developed, the other only hinted at; one is particularly fully developed, the other perhaps not at all perceptible to sensual observation. In the latter case Goethe is convinced that in every animal that which is not visible in the general type is nevertheless present in the idea.

"If, then, you see that one creature has been granted some special advantage, then only ask at once where it suffers any deficiency elsewhere, and search with an inquiring mind. You will immediately find the key to all education, for no animal with all its teeth fencing the upper jaw has worn a horn on its forehead, and therefore it is quite impossible for the lions to form the eternal mother's horns and offer her all power: For she hath not mass enough to plant the rows of teeth wholly, and also to sprout antlers and horns."

"The Metamorphosis of Animals"

In the archetypal organism all the members are formed and maintain their equilibrium; the diversity of the individual arises from the fact that the force of formation throws itself on one member and in its place another does not develop at all or only in a hint in its outward appearance. This law of the animal organism is today called that of the correlation or compensation of the organs.“ (Lit.:GA 6, p. 137f)