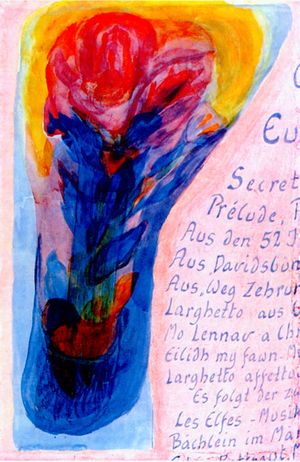 The archetypal plant or primordial plant (German: Urpflanze) is a concept from Goethe's theory of metamorphosis. It is the ideal archetype (the idea, conceptual archetype), from which all plant species can be thought to have emerged through modification.

„Goethe, before he came to his metamorphosis theory, was well occupied with that, what could be available to him in his time in knowledge of the spiritual world, and he got to know different ways, different means, through which man can try to approach the spiritual world. Only after Goethe's spirit was very, very deepened by the experiences, by the experiences with these means and ways, he started to grasp scientific ideas. And there we see, first of all, how Goethe, when he had come to Weimar and the means of the Jena University were gradually available to him, does everything to enrich his scientific knowledge and insights, but at the same time also does everything to gain coherent ideas about the various forms of organisms. And then again we see how Goethe starts his Italian journey, how he, while he is on the Italian journey, takes a look at everything he encounters in plant and animal forms, in order to study the inner relationship of the plant and animal forms in the rich diversity that now confronted him. And in Sicily he finally believed to have found what he then called his archetypal plant. What did Goethe think of as the archetypal plant? This archetypal plant is not a sensual entity. Goethe himself calls this original plant a sensual-supersensual form. It is something that can only be seen in the spiritual, but which is seen in this spiritual in such a way that when one sees a certain plant, one knows: this certain plant is a special form of the archetypal plant. Every plant is a special form of the archetypal plant, but no sensual-real plant is the archetypal plant. The archetypal plant is a sensual-supersensible being, which lives in all plants. So Goethe reached this idea: not only to pursue the different sensual forms, but to search for the one archetypal plant in all plants. With this he had, one could say, essentially deepened, very, very deepened, what had always existed as metamorphosis theory, and it was obvious to him to now also apply the idea of this metamorphosis theory on a wider scale to the organic, to the living...

Thus Goethe had recognized on one side in the plant leaf: When a plant grows, it develops leaf after leaf; but then, at a certain point, it completes the development of the leaf, and through the transformation of the leaf, first the petals are formed (see drawing b), but then also the stamens, organs with a completely different form, which are also nothing other than leaves, but transformed leaves. Thus, for Goethe, the whole plant is contained in the leaf.

So there is much that is invisible, supersensible in a leaf, the whole plant is in a leaf. Likewise, however, the whole head skeleton is already in the spinal column. Spinal column and head skeleton together form a whole, and the complicated head bones are just as transformed vertebral bones as the petals, indeed as the stamens and the pistil are transformed green leaves of the plant. Thus Goethe has the idea that that which lies supersensibly at the basis of the leaf transforms itself in the most manifold complicated ways and then becomes the whole plant; that that which lies in the spinal column transforms itself in a complicated way and becomes the head. This is essentially how far Goethe has come in his views.“ (Lit.:GA 171, p. 282ff)

Goethe writes about his botanical studies:

„The changeable nature of plant forms, which I had long followed on its peculiar course, now awakened in me more and more the idea that the plant forms surrounding us were not originally determined and fixed, but rather that they were endowed with a stubborn, generic and specific tenacity, a fortunate mobility and flexibility, in order to fit into so many conditions that act upon them above the earth's surface, and to be able to form and transform themselves accordingly.

Here the differences of the soil come into consideration; abundantly nourished by the moisture of the valleys, stunted by the dryness of the heights, protected from frost and heat in every measure, or both inescapably exposed, the genus can change to the species, the species to the variety, and these again by other conditions into infinity; and nevertheless the plant keeps itself closed in its realm, if it also leans neighborly against the hard rock, against the more mobile life over there and over there. The most distant ones, however, have a pronounced kinship, they can be compared among themselves without constraint.

As they can now be collected under one concept, so it became clearer and clearer to me little by little that the view could still be enlivened in a higher way: a demand that I had in mind at that time under the sensual form of a supersensual archetypal plant. I followed all the forms, as they appeared to me, in their changes, and thus at the last destination of my journey, in Sicily, the original identity of all plant parts became completely clear to me, and I now sought to pursue this everywhere and to become aware of it again.“

Goethe received essential stimuli for his plant studies on his trip to Italy, which he embarked on in 1786. Already on the way over the Brenner Pass, he was able to gain important insights into how the climate modifies growth forms:

„Concerning the plants, I still feel very much my discipleship. Until Munich, I really only thought I saw the ordinary ones. Admittedly, my hurried day and night journey was not favorable to such finer observations. Now I have my Linné with me and his terminology well memorized, but where should time and rest come from to analyze, which, if I know myself right, can never become my strength anyway? Therefore I sharpened my eye on the general, and when I saw the first Gentiana at the Walchensee, I noticed that I also found the new plants so far first at the water.

What made me even more attentive was the influence that the mountain altitude seemed to have on the plants. Not only did I find new plants there, but the growth of the old ones changed; if in the lower region branches and stems were stronger and fatter, the eyes were closer together and the leaves were broad, then higher up in the mountains branches and stems became more tender, the eyes moved apart, so that from node to node a larger space took place and the leaves formed more lance-shaped. I noticed this with a willow and a Gentiana and convinced myself that they were not different species. Also at Walchensee I noticed longer and more slender rushes than in the lower regions.“

Goethe first sought to find the archetypal plant in nature as an as yet unknown species, or even in the basic shape of a leaf or a stem. Once he thought he had found it in the botanical garden of Palermo:

„Palermo, Tuesday, April 17, 1787. It is a real misfortune to be pursued and tempted by many kinds of spirits! This morning I went to the public garden with the firm, calm intention of continuing my poetic dreams, but before I knew it, another ghost caught me, which had already been creeping up on me these days. The many plants that I was accustomed to seeing only in tubs and pots, and for most of the year only behind glass windows, stand here happy and fresh in the open air, and by fulfilling their purpose perfectly, they become clearer to us. In the face of so many new and renewed formations, I remembered the old cricket, whether I could not discover the archetypal plant among this crowd. There must be such a one after all! How else would I recognize that this or that structure was a plant, if they were not all formed according to one pattern?“

In these days Goethe's turn from the idea of a real existing archetypal plant to that of a model occurs. In the preceding quotation the turn with the term pattern is already indicated, clearly Goethe becomes in the letter of June 8 from Rome to Charlotte von Stein:

„Tell Herdern that I am very close to the secret of plant generation and organization, and that it is the simplest thing that can be thought. Under this sky one can make the most beautiful observations. The main point, where the germ is, I have found quite clearly and undoubtedly; all the rest I see also already in the whole, and only some points must still be determined. The archetypal plant will be the most wonderful creature of the world, of which nature itself shall envy me. With this model and the key to it, one can then invent plants into infinity, which must be consistent, that is, which, even if they do not exist, could exist and are not picturesque or poetic shadows and appearances, but have an inner truth and necessity. The same law will apply to all the rest of living things.“

This idea corresponds directly with the "Hypothesis Everything is leaf, and through this simplicity the greatest manifoldness becomes possible [...]"[3] Goethe is at the hinge and climax of his botanical path[4] Although the term "metamorphosis" is not yet used, we have here the core of the future teaching before us. Goethe now turns his attention to testing the hypothesis and to the change of form (metamorphosis) of the individual plant.

Schiller, in a conversation with Goethe on July 20, 1794, furthermore pointed out the Platonic ideal character of the archetypal plant. They had just left a meeting of the Naturforschende Gesellschaft in Jena, founded by Batsch, and had entered into conversation. Schiller was not very satisfied with the abstract view of nature cultivated there. Then Goethe developed for him the idea of a plastic-ideal form, which reveals itself to the spirit, when it surveys the diversity of plant forms and learns to understand the commonality of the constantly metamorphosing forms. Not arbitrary speculation, but unbiased observation he believed to owe this "archetypal plant":

„We arrived at his house, the conversation lured me inside; there I vividly recited the metamorphosis of the plants and, with some characteristic pen strokes, made a symbolic plant appear before his eyes. He listened to and watched all this with great participation, with a resolute grasp; but when I had finished, he shook his head and said: "This is not experience, this is an idea. I stumbled, annoyed to some extent; for the point that separated us was thus most strictly marked. The assertion of grace and dignity came back to me, the old resentment wanted to stir; but I pulled myself together and said: "That can be very nice to me, that I have ideas without knowing it, and even see them with my eyes.“