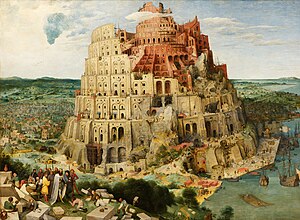 The Tower of Babel by Pieter Brueghel, 1563, Kunsthistorisches Museum, Vienna 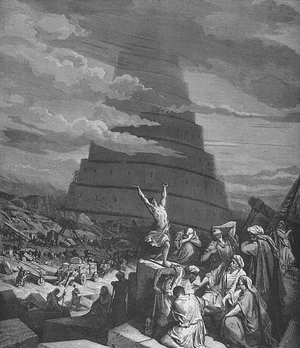 The Confusion of Tongues, Bible illustration by Gustave Doré (1865)

The Tower of Babel and the subsequent Babylonian confusion of languages is one of the best-known stories of the Old Testament.

„1 Now the whole earth had one language and the same words. 2 And as people migrated from the east, they found a plain in the land of Shinar and settled there. 3 And they said to one another, “Come, let us make bricks, and burn them thoroughly.” And they had brick for stone, and bitumen for mortar. 4 Then they said, “Come, let us build ourselves a city and a tower with its top in the heavens, and let us make a name for ourselves, lest we be dispersed over the face of the whole earth.” 5 And the Lord came down to see the city and the tower, which the children of man had built. 6 And the Lord said, “Behold, they are one people, and they have all one language, and this is only the beginning of what they will do. And nothing that they propose to do will now be impossible for them. 7 Come, let us go down and there confuse their language, so that they may not understand one another’s speech.” 8 So the Lord dispersed them from there over the face of all the earth, and they left off building the city. 9 Therefore its name was called Babel, because there the Lord confused[1] the language of all the earth. And from there the Lord dispersed them over the face of all the earth.“

Tower building and development of personality

„But then it was precisely the Babylonian people who had the task of leading this living spiritual connection of man with the spiritual world down into the personal, where the personality is placed on its own in its individuality, in its particularity. That was the task of the Babylonians, to lead the spiritual world down into the physical plan. And connected with this is the fact that this living feeling, this spiritual feeling for the language ceases and the language is oriented according to the climate, the geographical situation, the race of the people and the like. That is why the Bible, which tells us more correct things about these things than the fantasies of Mr. Fritz Mauthner, who calls himself a linguist, describes this important fact to us in the building of the Babylonian tower, where all the people of the earth who speak a common language are scattered. We can also understand this Babylonian tower building spiritually if we know how buildings were constructed in ancient times. Such buildings, which were built for the purpose of performing certain acts dedicated to sacred wisdom, or which were to be landmarks for sacred truths, such buildings were built in ancient times in the dimensions taken either from heaven or from man. And this is basically the same thing; for man, as a microcosm, is a replica of the macrocosm, so that the measurements which are secreted into the pyramid are taken from heaven and from man.

So if we could go back to ancient times, to relatively early times, we would find symbolic imitations of human or celestial measurements everywhere in the cult buildings. Length, width and depth, the way the interior was architecturally designed, everything was modelled on the measurements of the heavens or the human body. But that was just the way it was: Wherever there was a living consciousness of the connection between man and the spiritual world, the measurements were taken from the spiritual world. How was it to be in the time when human knowledge was to be brought down, as it were, from heaven to earth? From the general spiritual-human to the human-personal? Then the measurements could only be taken from the human being himself, from the human personality, in so far as it is the expression of the individual I-ness. This, however, had to become the Babylonian tower, the place of worship for those who were to take the measurements only from the personality. But at the same time it had to be shown that the personality must first gradually mature in order to ascend again into the spiritual worlds. We have seen that it was necessary to pass through the fourth and fifth periods in order to ascend again. At that time it was not possible simply to ascend again into the world of the spiritual regions. This is what is meant by the fact that the Babylonian building of the tower must have been a failed affair, that heaven could not yet be reached with what could be taken from the human personality. There is something tremendously profound in this symbol of the world, in the Babylonian building of the tower, through which men were limited to their individual human personality, to what the personality could become in some people under individual special circumstances.“ (Lit.:GA 126, p. 67ff)