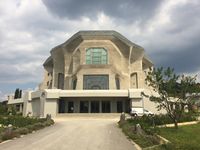 Dornach (in dialect: Dornech or Dornecht) is a Swiss municipality near Basel and the main town of the Dorneck district in the canton of Solothurn (SO). Today, Dornach has about 6,778 inhabitants (as of 31 December 2018) and shares its railway station with the neighbouring municipality of Arlesheim.

On 22 July 1499, the Battle of Dornach, the last military conflict between the Swabian Confederation and the Confederates during the Swabian War, took place here.

From 1913 Rudolf Steiner had the first Goetheanum, which he had planned, built on the Dornach hill. The building, still unfinished, was destroyed by fire on New Year's Eve 1922/23. Only three months after the fire, in March 1923, Steiner published his plans for the reconstruction in the weekly journal "Das Goetheanum". The second Goethanum, however, was not built fireproof in concrete until after Rudolf Steiner's death, between 1925 and 1928, and has since been the headquarters of the worldwide General Anthroposophical Society.