Threefold structure of the human organism 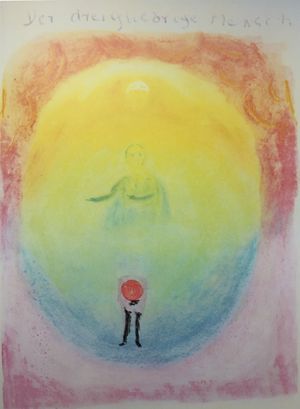 The threefold structure of the human organism is a central principle of the anthroposophical study of man and was first explicitly presented by Rudolf Steiner in his book "Von Seelenrätseln" (English: "The Case for Anthroposophy") in 1917 (Lit.:GA 21).

„The nervous and sensory system, as it is centralised in the head, is in the human organism an independent member, existing for itself. What exists as the pulmonary and cardiac system, as the circulatory system, is in turn an independent member existing for itself. Likewise the metabolic system. You can read more about this in my book "Von Seelenrätseln". That is the characteristic feature of the human organism, that its systems unfold their right development and effectiveness precisely because they are not centralised, but because they exist side by side and work together freely. If today we cannot understand the human organism in this comprehensive, penetrating way, we certainly cannot understand the social organism with science, which has not yet been reformed, but which must be reformed in the spiritual-scientific sense. One believes today that the human organism is something centralised, whereas it is threefold.“ (Lit.:GA 328, p. 21)

The three systems of the human organism

Three very different systems of the human organism can be clearly distinguished:

The nerve-sense system is mainly centred in the head and is the physical tool for sensory perception, imagining and thinking. It provides the basis for the human being's alert daytime consciousness, which is devoted to the sensory world.

The rhythmic system includes breathing and circulation and is therefore appropriately centred in the chest area. It is the most essential physical tool of the emotional life and of the human language sounding in the living flowing breath. Every mood change, every joy, every sorrow is reflected in a slight change in breathing and an accelerating or decelerating pulse beat, just as every bodily change in breathing and heart rhythm immediately affects our emotional life. However, we do not experience these feelings as clearly and awake as what we experience through our nervous-sensory system. In our emotional life we are actually constantly dreaming.

The metabolic-limb system is fundamental to the unfolding of our will. In particular, the upright posture of the human being is also based in this system. The inner processes that take place remain even more unconscious to us. What actually happens in the depths of our organism when we walk upright through the world, or when we willingly grasp an object with our freed hands, largely eludes our consciousness. But it is precisely in this that the actual reality of the human will lies, and not in the mere mental imagination that accompanies it. In the will we are actually constantly asleep.

In animals, especially in the higher animals, this threefold structure of the organism is already clearly visible, but it is nowhere as well-balanced as in man. Only the finely tuned harmony with which these three systems, interpenetrating each other in a lively way, work together in man to makes his upright posture, articulate speech and rational thinking possible.

Correlation with thinking, feeling and willing

The three systems of the human organism form the bodily basis for the mental abilities of thinking, feeling and willing.

„If we now summarise all which is experienced in the soul as imagination and look for the bodily processes with which this experience is to be related, we find the corresponding connection, in that we can to a large extent follow the results of present-day physiological psychology. The bodily counterparts of the imagination which is experienced in the soul are to be seen in the processes of the nervous system with their outflow into the sense organs on the one hand and into the bodily inner organisation on the other. However much one may have to think differently from the anthroposophical point of view than present science does, a foundation of an excellent kind is present in this science. This is not the case when one wants to determine the bodily counterparts of feeling and willing. With regard to this, one must first pave the right way within the results of present-day physiology. Once we have found the right path, we find that, as imagination is related to nervous activity, so feeling must be related to that rhythm of life which has its centre in respiratory activity and is connected with it. It must be borne in mind that, in order to attain the desired goal, the rhythm of respiration, with all that is connected with it, must be traced to the outermost peripheral parts of the organisation. In order to arrive at concrete results in this field, the experiences of physiological research must be pursued in a direction which is still often unfamiliar today. Only when this is accomplished will all the contradictions disappear which at first arise when feeling and respiratory rhythm are brought together. What initially provokes contradiction becomes proof of this relationship on closer examination. From the wide area that must be pursued here, only one example is singled out. The experience of music is based on feeling. The content of the musical image, however, lives in the imagination, which is conveyed through the perceptions of the ear. How does the musical feeling experience arise? The idea of the sound image, which is based on the auditory organ and the nervous process, is not yet this musical experience. The latter arises when the rhythm of breathing in its continuation into this organ meets in the brain with what is accomplished by the ear and the nervous system. And the soul does not live in what is merely heard and imagined, but lives in the respiratory rhythm; it experiences that which is triggered in the respiratory rhythm by the fact that, as it were, what is going on in the nervous system comes up against this rhythmic life. One has only to see the physiology of the respiratory rhythm in the right light, and then one will come to a comprehensive recognition of the proposition: the soul experiences in a feeling way by relying on the respiratory rhythm in a similar way as it does in imagination on the nervous processes. - And with regard to the will, one finds that this is based in a similar way on metabolic processes. Again, we must take into consideration all the branches and offshoots of metabolic processes in the whole organism. Just as when something is "imagined" a nervous process takes place on the basis of which the soul becomes conscious of what it has imagined, just as when something is "felt" a modification of the respiratory rhythm takes place through which a feeling comes to life in the soul, so when something is "wanted" a metabolic process takes place which is the bodily basis for what is experienced as wanting in the soul. - Now in the soul a fully conscious, awake experience is only present for the imagination mediated by the nervous system. That which is mediated by the respiratory rhythm lives in the ordinary consciousness in that strength which the dream imaginations have. This includes all feelings, all affects, all passions and so on. The will, which is based on the processes of metabolism, is not consciously experienced to any greater degree than in the very dullness that exists in sleep. On closer examination of what is in question here, one will notice that the will is experienced quite differently from the imagination. The latter is experienced as one sees a surface covered with paint; the volition as a black surface within a coloured field. One "sees" something within the surface on which there is no colour precisely because, in contrast to the surroundings from which impressions of colour emanate, no such impressions come from this surface: one "imagines the wanting" because within the soul's experiences of imagination a non-imagining inserts itself at certain points, which inserts itself into the fully conscious experience in a manner similar to the interruptions of consciousness spent in sleep in the conscious course of life. From these different kinds of conscious experience arises the diversity of the soul's experience in imagining, feeling and willing.“ (Lit.:GA 21, p. 150ff)