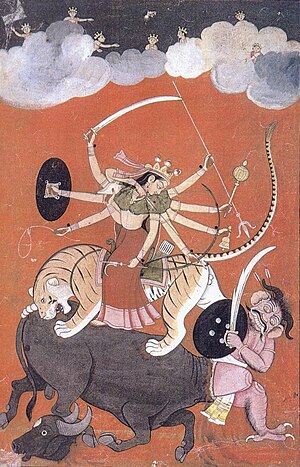 Shakti as Durga who defeats the buffalo demon, embodiment of evil.

Shakti (Sanskrit: f., शक्ति śakti "force") in Hinduism stands for the female elemental force of the universe and is the active energy, which is also symbolised by the Kundalini serpent. Her epithet Gauri means the golden one. As Kriya Shakti (Sanskrit: क्रियाशक्ति kriyāśakti f. "action"), she is the self-producing power that man had before the Fall and which he will regain in a new way in the eighth root race. Shakti is often equated with the female counterpart (or the female side) to the three main Indian gods. Her masculine, volitional side is Iccha Shakti (Sanskrit: इच्छाशक्ति icchāśakti f. "impulse, will, wish"). Its third aspect is Jnana Shakti (Sanskrit: ज्ञानशक्ति jñānaśakti f. "power of knowledge, from jnana Sanskrit: ज्ञान jñāna n. "knowledge, wisdom, insight").

„The two sexes are preceded by a bisexual humanity in which each individual has both within him; a hermaphroditic humanity. The most ancient gods were always described as bisexual. We still find it in ancient Greeks. The mystery temples were full of hermaphroditic figures. Even the Bible itself still contains an awareness of this, in that it indicates the separation of the sexes as the emergence of the two sexes from the bisexual. This is even more evident in the Persian myth.

At the time of the separation, all the powers of man were even more magical, more immediate than they are now, so that after the separation we find in the being two still magical spiritual powers, separated into male and female. Those of the male must be called forces more related to the will, those of the female as forces related to the mind and memory. Thus humanity is divided. In Sanskrit, Iccha Shakti is the power more akin to the masculine; Kriya Shakti, the power more akin to the feminine. Both forces do not exist in their original form, because in the course of further development, the feminine mind-like force has become similar to the masculine will-like force. The hermaphroditic humanity was the bearer of the very first most advanced Pitris, who could not yet incarnate into these half-afflicted sexes, and who therefore had the powers in physical bodies to express the human being twice over. These are the great sons of the fire-mist, the Arhats. The best known is Hermes Trismegistos, the Egyptian.“ (Lit.:GA 90a, p. 503f)

Sarasvati is the goddess of the fine arts (all teaching forms and arts) and the wife of Brahma. Lakshmi, wife of Vishnu, appears as the goddess of happiness, wealth and beauty. Shiva's consort, Parvati, can appear in the following manifestations: Uma (full of feminine grace) or as Durga the warrior. When disaster rises in the universe, the three (Sarasvati, Lakshmi, Parvati) combine to form Kali, the other side of Shakti, who destroys everything in her path.

In Shaktism, Shakti has a central role as the ruling deity, and in some philosophical directions of Shaktism, Shakti is regarded as the kinetic aspect of Brahman, the only one who truly exists, who brings forth, is herself and rules the manifested world and all its manifestations.

In a poem by Friedrich Rückert (The Goddess Gauri), Shakti is described as the patron saint of craftsmen.