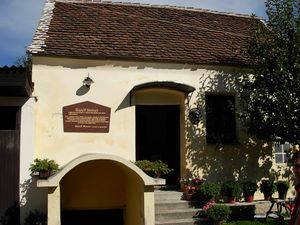 The presumed home of the Steiner family in Donji Kraljevec. Rudolf Steiner's birthplace, on the other hand, was presumably the station house on the southern railway line, which was destroyed in World War I.

Donji Kraljevec, a small village in northern Croatia not far from Čakovec, is Rudolf Steiner's birthplace. The village is located on the so-called Mur Island between the Mur and Drava rivers, which Rudolf Steiner also liked to call the "Two Rivers Land". The municipality of the same name, Donji Kraljevec, which has 4,659 inhabitants according to the 2011 census, is administratively incorporated into the Međimurje County.

„My parents had their home in Lower Austria. My father was born in Geras, a very small town in the Lower Austrian Waldviertel, my mother in Horn, a town in the same area. My father spent his childhood and youth in close connection with the Premonstratensian monastery in Geras. He always looked back on this time of his life with great affection. He liked to tell how he had served in the monastery and how he had been taught by the monks. He was later a hunter in the service of the Count of Hoyos. This family had a property in Horn. That's where my father met my mother. He then left the hunting service and joined the Austrian Southern Railway as a telegraph operator. He was first employed at a small railway station in southern Styria. Then he was transferred to Kraljevec on the Hungarian-Croatian border. During this time he married my mother. Her maiden name is Blie. She comes from an old Horner family. I was born in Kraljevec on 27 February 1861. - That's how it came about that my place of birth is far removed from the region of the earth from which I come.“ (Lit.:GA 28, p. 10)

At present, the Centar dr. Rudolfa Steinera is being built in Kraljevec with the financial support of the main sponsor, Mr. Daniell Peter Porsche. The design was created by a Croatian architect with the help of the Viennese architect Willi Grass, who was also responsible for the detailed planning of the interior and exterior. The house includes a small office and a library on the ground floor, a large hall on the first floor, where Rudolf Steiner's four Mystery Dramas will be performed in the future, and a eurythmy hall on the top floor. A guest house with two flats has also been restored in the small garden surrounding the house.